Many of us might receive our electric bill, pay it and move on. Sometimes you already know when it’s going to be a little higher or lower than usual based on your usage, or the time of year such as summer and winter months when temperatures are less mild. But not all electricity plans are the same, and if you’re not on a fixed rate, your electricity rates can change monthly or on a more frequent basis.

In this article we are going to breakdown what impacts electricity rates in Texas and how you can navigate your power bill. We will cover:

The Electricity Reliability Council of Texas (ERCOT) regulates the deregulated energy areas in the state (about 85% of power consumed) and oversees the power grid which transmits the flow of electricity to your home; they also monitor the cost of electricity in Texas. The utility transmission company, which manages the wires, checks meters and corrects outages (called a TDU), charges a regulated fee which is included in the bill that you receive from the energy company that sold you the power.

ERCOT does not name the price of electricity; the light companies set the price. Their job is to ensure Texans have reliable electricity at an affordable price. However, like all goods, supply and demand impact electricity rates. 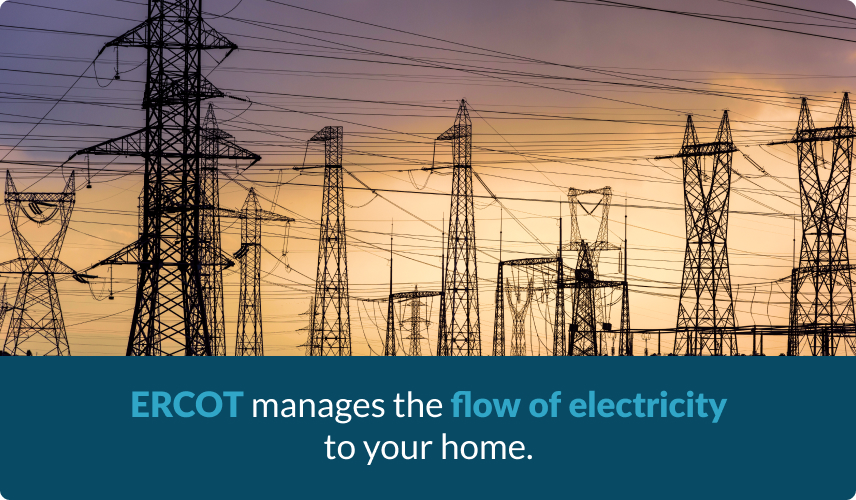 If you have a fixed-rate plan in Texas, the “energy charge” on your bill should not change for the term of the contract. However, if you have a variable-rate plan, you might notice that your Texas electric rates can be significantly different from month to month. Anyone on a month-to-month energy plan can see that the electricity rates they are charged can change rapidly. Why is that? The top factors that impact your Texas electricity rates include:

One of the largest influences on electricity rates is the time of the year. Not only does the weather affect how much energy we use, but the activities that are more popular in certain seasons can drastically change the amount of electricity that is consumed. As the demand for electricity in Texas goes up, the market price goes up, and therefore your electricity rates might be affected.

Summer has some of the most extreme weather in Texas. Around this time of year, you’re probably turning the AC on, the pool filter is running, and the kids are home from school and watching more TV. Your electricity bills are going to be higher due to usage, but electric companies also raise their rates due to demand.

Across the country, people are using more electricity to stay cool, so energy rates everywhere will go up. If you are looking for a fixed rate contract and enroll during summer, you may be locked into a higher electricity rate than if you sign up during other seasons.

Though temperatures aren’t as frigid in the Lone Star State, the market price for electricity can go up during this time, such as during the catastrophic freeze in February 2021, which caused mass outages and caused rates on variable-rate plans to spike. Also, Christmas lights can make a mark on your electric bill.

Just as electricity rates go up, they also come down. During the more mild spring and fall seasons, the need for AC and heat significantly reduce, so energy rates tend to fall. During this time, energy providers may lower rates to draw more customers in. If you’re in the market to switch electricity plans, this is a good time of year to do it.

Even on the hottest days, utility companies can typically keep up with electricity demand. But there are times when supply cannot meet demand, and electricity companies are forced to raise prices. Hurricane season is one of those times. These monster storms can take out natural gas sources, power plants, and wind turbines that all generate electricity.

The Cost of Electricity Sources

Natural gas is one of the most popular ways to generate electricity. However, that is not its only use. When the price of natural gas goes up, the price of electricity must also go up because it’s the primary fuel source for electric generation in Texas. 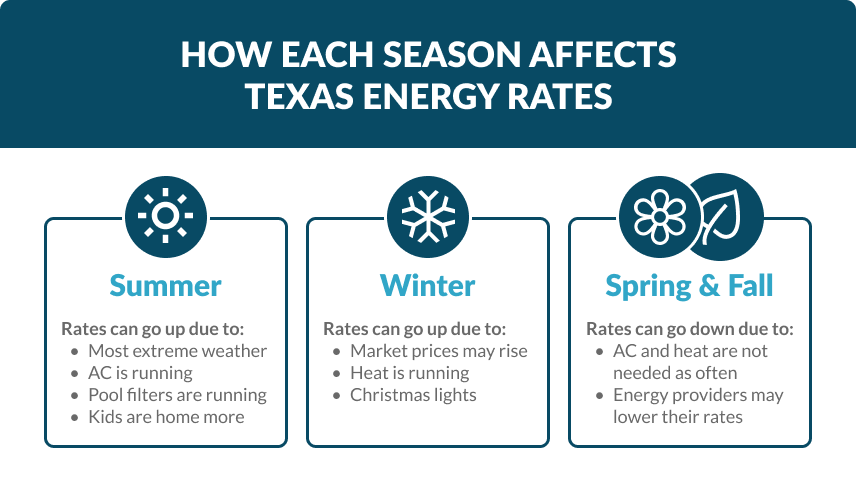 How Do I Find the Best Electricity Rates in Texas?

Fortunately, Texas ranks #7 in the nation for the cheapest electricity. We are fortunate to be huge producers of electricity from natural gas and wind. It’s the top reason that Texas electricity companies can keep their energy rates so low.

As a consumer, it’s important to learn what is going on with your electricity. By tracking these electricity rate trends and making small changes to use less energy, you can take control of your energy bills. 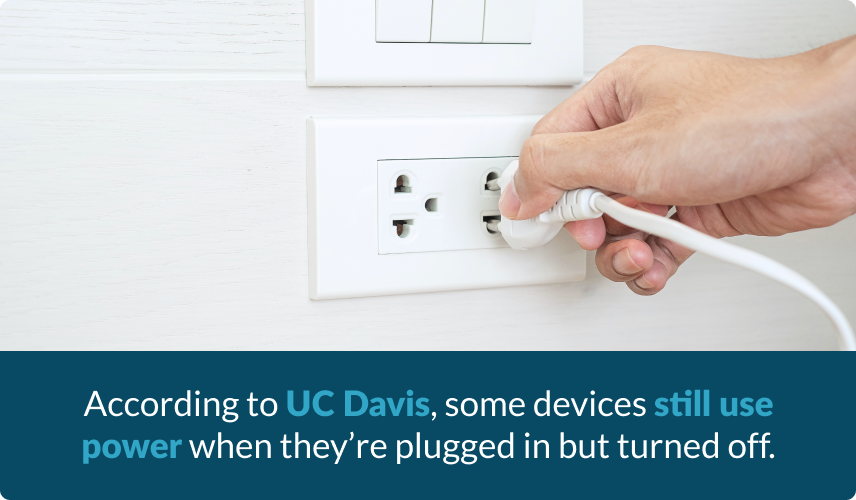 Do I have control of my Texas electricity rates?

How can I lower my electricity bill?

There are several simple steps you can take to lower your electricity bill. These include:

Unplugging electronics when not in use. According to UC Davis, some devices still use power when they’re plugged in but turned off. These “vampire loads” cost the US $10 billion a year in electricity. Some power strips can prevent this as well.

Adjusting your thermostat by a few degrees. Every degree you adjust your thermostat, so it isn’t working as hard, saves you one percent on your energy bill.

Changing your air filters on a frequent basis. Dirty filters mean your air conditioner (or any appliance that has an air filter) is working overtime. Keeping your appliances clean will help them run more efficiently.

Use energy-efficient light bulbs throughout your home. LED light bulbs use 90% less energy than traditional incandescent bulbs. Plus, they last longer.

Shop and save at HomeEnergyClub.com. We find the cheapest electricity rates in Texas and offer energy promo codes so that you don’t overpay.

Want to see the lowest cost energy plans
based on your home’s actual kWh usage?

Show me the best matches for my home

No, please send me to the home page

I’ll estimate my usage to select a plan

Thank you for giving us your information so that we
can send you our best rates when you need them.

We will soon send you a link to our Savvy Shopper's Guide. It includes:

You should always read a plan’s EFL details to decide if it’s a fit for you, but our system does the tedious math to help you compare estimated costs. Of course, your future bill amounts will depend on your future usage.

You will find a widget on Home Energy Club which fetches your home’s energy usage data from Smart Meter Texas (SMT) and runs calculations of the rate structures of energy plans to help you conveniently estimate the cost of energy plans you are considering, based on your prior 12 months of energy usage as reported by SMT.

In one of the text panels of the widget, you will see an authorization button. By checking the permission box above the fields in which you enter your name and email address, and clicking on the authorization button, you are authorizing Smart Meter Texas to provide us with your location’s energy usage information so that our system can run cost calculations. It’s important to note that errors can occur when developing and running calculations, and the Company does not guarantee that its cost numbers are correct. You should always read the Electricity Facts Label (EFL) for each energy plan you are considering before enrolling, and make an independent decision on whether the plan is an appropriate fit for your home based on your own calculations and all the information disclosed by energy providers in the EFL.